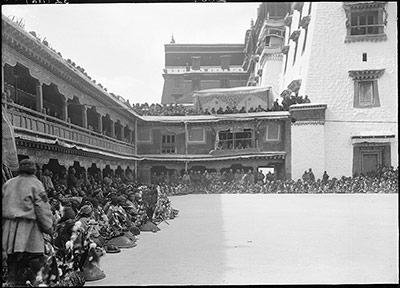 Eastern courtyard or Deyang Shar in Potala with soldiers wearing old-style uniforms sitting around the perimeter. Spectators can be seen on the roof and verandah. An applique tent can be seen on the second storey to shelter higher ranking officials

Other Information - Setting: This image was probably taken at the Tse Gutor ceremony at the Potala at the end of the old Tibetan year in preparation for the new [MS 17/02/2006]