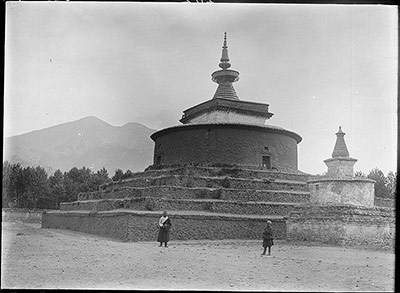 Manual Catalogues - Bell's List of Illustrations entry: "[No. of chapter] XXXII to XXXIV. [Subject of Chapter] The Religion [Subject of Illustration] H.202 (dc) Large Chorten at Kungtang. Built when the monastery was founded. Inside are many images of Buddha. Inside the door is a circular passage, a few feet wide, going round the building."