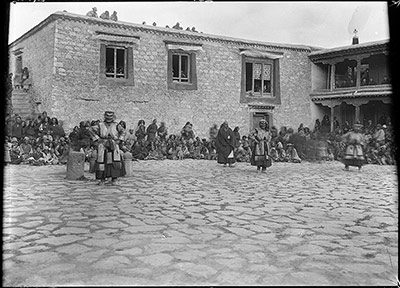 Atsaras or 'clown' dancers whose role includes entertaining and explaining the meaning of religious dances seen performing in the courtyard at Kungtang monastery. Spectators are seated around the perimeter on the floor, roofs and verandah. Three masked dancers can be seen in the centre of the image. The performance was stopped to enable Rabden Lepcha to take this photograph

Other Information - Setting: On May 20th according to Bell's Diary, he travelled to Kungtang, 5 miles from Lhasa up the Kyi Chu Valley, to witness the religious ceremonies that commemorated the birth of Gotama Buddha, the enlightenment of Gotama Buddha and the Buddha's entry into Nirvana.

Other Information - Description: Bell describes the ceremonies in some detail in his Diary for May 21st 1921:"The whole performance is, as usual, in the courtyard of the monastery. Seated on the ground round the sides are the ordinary spectators, and in veranadahs and rooms round are those of the upper classes. The Tsendron tells me that by watching these dances spectators not only have the pleasure of watching the show, but gain religious merit ( ge-wa ) also. ... The Black Hat dance is followed by a dance executed by eight Atsaras. This says the Tsendron , is the only dance executed by the Atsaras in Central Tibet. The Atsaras, who are the servants of the Chyokyongs, are represented as Indians, (for both the Chyokyongs and their servants are supposed to be Indians). They have large noses, large, round, staring eyes, big mouths with prominant teeth, thin cheekbones and thin bodies. // Next comes a dance of Chyokyongs. The Tsendron stops this for a moment (not at my suggestion) and [?] Rabden to take a photograph of it for me. And so with some of the later dances." [Diary Vol. X, pp. 67-68]