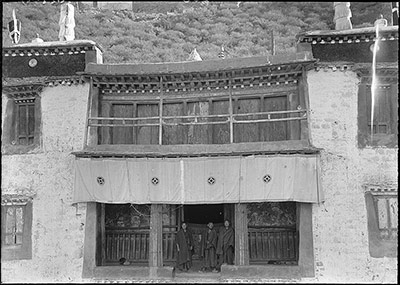 Other Information - Related Images: Bell does not distinguish in his list of illustrations between 1998.285.229 and 1998.285.230, and both may be referenced by the caption for H.200. It is almost impossible to distinguish between the two images, but equally there are no indications that the one is a re-photograph of the other. The only slight variation, which may be discernible under magnification, is a small movement in the head of the monk at the centre of the group. However, there are also differences in focus making this difficult to establish [MS 8/6/2004]