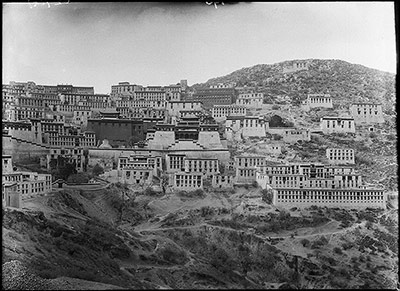 Part of Ganden Monastery showing Tsongkhapa's tomb in the centre left, the large four-pillared Assembly Hall of the monastery, the house where the Ti Rimpoche lived and the Dalai Lama's apartments under gilt roofs

Manual Catalogues - Bell's List of Illustrations entry: "[No. of chapter] XXXII to XXXIV. [Subject of Chapter] The Religion [Subject of Illustration] H.193 (ck) part of Ganden Monastery. In the red house below (i) (left center) is Tsong-ka-pa's tomb; in the centre below (ii) with 4 pillars, is the large Assembly Hall of the Monastery; on right of this below (iii) is the house where the Ti Rimpoche lives and the Dalai Lama has his apartments. These 3 are all under gilt canopies."

Other Information - Setting: Bell made a brief tour to Ganden in April 1921. Bell's diary entry for 15th April 1921: 'After the usual refreshment of tea and cakes we see first the house in which the Ti Rimpoche lives (photo half plate). In it the two rooms immediately under the great gilt dome are reserved for the Dalai Lama and opened only when he comes. The Ti Rimpoche live in the right of the building. // Now we see the famous tomb of Tsong-ka-pa. Entering a large red building, almost the only one, a building surmounted with a gilt-pagoda-like roof, we find the tomb in a small chapel of its own, enclosed in a circular Mongoliantent, whose walls are felt, overlaid with silks, and supported by pillars of red-laquered walnut wood. This tent envelopes nearly the whole of the chapel. In the foreground,as we enter, is a large mandala, i.e: a platform in this case partly of wood and partly of silver gilt, on which are arranged religious emblems of many kinds, gold and gilt, including figures of elephants, of sacred gems (nor-bu), and [indecipherable]' [Vol. X, p.9] [MS 2/6/2004]

Contemporary Publication - Published in 'The Religion of Tibet', Bell, C. A., Oxford: Clarendon Press, 1931, facing p.100:"Ganden Monastery. Tsong-ka-pa's tomb is in the red building (left centre); close to this in the right, with four pillars, is the monks' Assembly Hall."