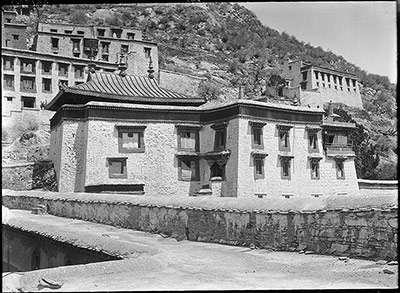 The Dalai Lama's quarters in Ganden Monastery, situated to the left under the gilt roof. To the right behind the wooden balcony are the Ti Rimpoche's quarters. Sun-dried, whitewashed walls.

Bell's entry:"(cg) Dalai Lama's quarters in Ganden Monastery, to the left under gilt canopy; to the right behind wooden balcony, are the Ti Rimpoche's quarters. Walls of sun-dried brick, whitewashed."

Other Information - Setting: Bell went on a brief trip to Ganden monastery in April 1921. Bell's diary entry for 15th March 1921: 'After the usual refreshment of tea and cakes we see first the house in which the Ti Rimpoche lives (photo half plate). In it the two rooms immediately under the great gilt dome are reserved for the Dalai Lama and opened only when he comes. The Ti Rimpoche live in the right of the building' [Vol. X, p.9] [MS 2/6/2004]