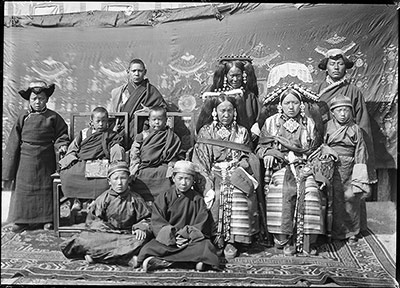 Members of one of the noble families of Lhasa, the Ragashar family. Textile hanging behind them. Sitting and standing on carpet.

Contemporary Publication - Published in 'The People of Tibet', Bell, C. A., Oxford: Clarendon Press, 1928, frontispiece:"A noble family of Lhasa tracing its descent for 1400 years. Seated in left, two small sons, who are Living Buddhas, with teacher behind and boy servants in front. Mother and brother's wife beside them". [MS 10/9/2004]

Other Information - Dates: Bell went on a short tour north of Lhasa at the beginning of April 1921. In his diary for 17th April he states:"On the way [back to Lhasa] a servant of Rakashar met us with an invitation to his house, 8 miles or so out of Lhasa. We spent a very pleasant hour conversing with the head of the family, a Depon recently returned from Eastern Tibet. Poor man, though only 35 years old (Tibetan reckoning), he is crippled with gout." [Vol. X, p.22]

Exhibition - Photograph caption from Seeing Lhasa exhibition at Pitt Rivers Museum, 7 September 2003 - 30 November 2004: "The Ragashars are one of two Lhasa families who trace their ancestry to the religious kings of Tibet (7th -9th centuries). The boys described by Bell as servants were probably employed as playmates for the young incarnates.