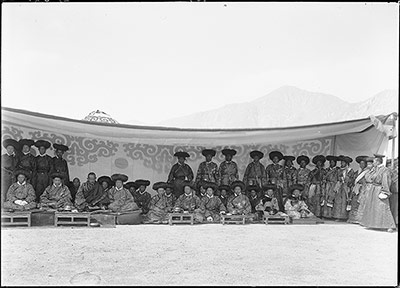 Officials gathered for the Trapshi Tsisher ceremony at Lubu near Lhasa

Other Information - Description: Full description of Trapshi event from Bell's diary for 2nd March 1921: "First we see a procession of the horsemen. Each lay official of high rank furnishes his own contingent. Shappes are expected to show 24, Depons 10, others a smaller number, though these numbers are not adhered to rigidly. Many show nine, which in Tibetan is a number expressing countless host. Each horseman is dressed in an iron helmet, coat and belt of armour, and leather breeches. Each carries a spear (dung), [?] gun, bow and arrows. Each contingent rides into the cleared space in front of the Shappes, a rough oval 40 yards long by 30 yards across. Here are four young men, soon to become civil officials. They examine the leaders of each contingent, then advance half way to the Shappes tent. Removing their yellow hats and making profound bows they announce all in order and call out the name of the owner of the number of the horsemen, each of the four certifying to the correctness of a part of the equipment. I ask the Tsendron why one does not certify to the whole, and I am told 'It would be too great a tax on one man's memory." // Thus once again we find the story of the days of old figuring in the spectacle provided for modern Lhasa, if the epithet modern can be applied even to the Lhasa of today. // In the centre of the oval space are the prizes, coloured silks from China, bricks of tea from the same country, carried three months journey through the heart of Asia. Also too capacious damascene beer jugs, with handsome gold bands, from which a little beer will, later on, be given to the competitors. // The proceedings end with a procession of all the cavalry, three to four hundred in number, to Lhasa with the Ya-so at their heads" [diary vol. IX, pp.5-7] [MS 3/6/2004]