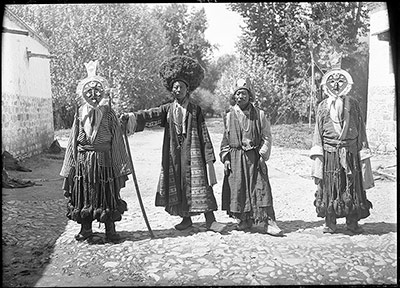 A flag pole with a Union Jack can be seen in the background, suggesting that this photograph may have been taken when the troupe performed on the final day of the Ache Lhamo put on by Sir Charles Bell on 12th-15th August [MS 16/9/2004]

Bell's Diary for 15th August 1921:"Today is the third day of my Ache Lhamo entertainment to my Tibetan friends. The Kyor-mo Lung-nga [ Tibetan script ] perform today. The original Kyor-mo Lung pa came from a district some half dozen miles only out of Lhasa. But now-a-days they are recriuted from all over the country, and above of all the troupes, have women and girls to act as well as men. They act about five pieces well, but will perform many others if required. They are professional actors, as they are continually acting and doing little or no cultivation. To the Gyan-ka ras and other famous ttroupes their cultivation is the chief thing and acting is a by-product. // The Kyor-mo Lung-pas go to many districts and some of them even to Darjeeling, but all the best ones do not go, nor do they have the best dresses, which when in Lhasa, they can borrow from the D[alai] L[ama] or from the Tibetan nobility." [Diary Vol. XII, p.4]

Bell's Diary for 16th August 1921:"I ask Shesur about the different troupes, and especially about the most popular troupe, the Kyor-mo Lung-nga . He replies, "There are altogether 15 to 20 performers in the Kyor-mo Lung-nga troupe of whom two or three only are girls; the rest are men. These girls are from about 15 to 25 years old; beyond that age women do not act. It is said that the troupe known as the Pim-dum-pa were originally seven sisters ... but now-a-days this troupe consists of men only. ... After the theatricals at Norbu Lingka are ended, a few of the troupes perform for a few days before some of the leading families of Lhasa. The other troupes then return to their cultivation. and are in rather a hurry to get away, because it will be about time to reap their crops by the time they reach their homes. But the Kyor-mo Lung-nga are poor and have no cultivation. Being the best at acting they give rather more performances than do the other troupes, and then split up into small parties and earn their livelihood by petty trading. The one who took the part of Ya-ma-ga-ti trades in the Lhoka province in wollen cloth ( nam-bu ); others in musk in Kong-bo, and so on. Before the seventh month comes round, they return to be coached by Ya-ma-ga-ti in the performances, which have to be given at Norbu Lingka and elsewhere during that month." [diary Vol. XII, pp.20-21]

Bell's Diary for 29th July 1921:"The Ache Lhamo troupes who are to perform shortly before the D[alai] L[ama] from the 1st to the 5th of the first 7th month, are the best in Tibet. I am having the two best of the troupes, ie: the Gyang-karas [? check] and the Kyi-mo-lung-was, on the 9th and 10th of the first 7th month (12th and 13th of August) because they are allowed to perform in Lhasa town up to the 8th of this Tibetan month. The Tsendron says that the reason why they are not allowed to perform in Lhasa after the 8th is because the people would waste too much time going to see them. They are however allowed to perform in the lingkas outside Lhasa, but the people do not go to see them there as much as they would in Lhasa." [Diary Vol. XI, p.63-64]

Other Information - Description: Bell's diary entry for 4th August 1921 relating to the Kyormo Lung-nga troupe at a performance at the Dalai Lama's Ache Lhamo at the Norbu Lingka: "Now appear the Kyor-mo-lung-nga, the most famous of all the theatrical troupes of Tibet. The country Kyor-mo-lung from which they take their name and from which their first actors came, is near Lhasa; but nowadays they are joined by people from all parts of Tibet. They are the only one of the troupes in which women take parts. They do more theatrical work and less agricultural than any of the other troupes and their repertary of [?] is the largest. In fine, they are the best of all the troupes, and are the most highly appreciated by the people of Lhasa and elsewhere"