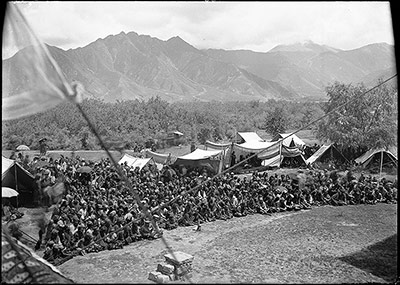 View of the spectators sitting on ground at Sir Charles Bell's Ache Lhamo. Behind them, tents and more spectators. Wooded plain and mountains in background. Kyichu river in the distance on the right of the image. In the foreground two guide ropes

Manual Catalogues - Bell's List of Illustrations entry: "[No. of chapter] XXVII. [Subject of Chapter] Amusements. [Subject of Illustration] H.138 (j) Some of the spectators at my Ache Lhamo. Behind them, tents with other spectators. Behind these, the wooded plain. In background the mountains. A glimpse of the Kyi chu can be seen on the right. In foreground two of the ropes supporting the canopy over the stage. [Remarks] L.132"

Other Information - Location: Note - Bell states that the guide ropes support the canopy over the stage. Only the one coming diagonally from the right appears to do so; the other appears to be a guide rope for Bell's tent on the roof [MS 3/6/2004]


Other Information - Photographer: Three images, 1998.285.158, 1998.285.159 & 1998.285.160 are all of Bell's Ache Lhamo performance. However, it is very difficult to determine who took the different photographs. In 1998.285.158, both Bell and Kennedy can be seen on the roof. Both are holding objects in their hands, but under magnification these objects do not appear to be cameras. Intriguingly, to the right of Bell (left facing), outside the tent and crouching down below the edge of the verandah, a Sikkimese Lepcha man can be seen, identifiable by his distinctive headgear. This seems likely to be Rabden. This figure appears to be holding something to his left eye but this is in fact something attached to the guide rope, as can be seen from the shadow on the roof. However, this suggests that Rabden may have taken 1998.285.59, which has been taken from Bell's right hand side, outside the tent, from the roof. Image 1998.285.60 seems to have been taken within the tent, therefore possibly by Bell (with Rabden looking after his camera for him while Bell watched the performance?), but it is very difficult to match up the guide ropes in this series of images [1998.285.158, 1998.285.159 & 1998.285.160] to work out whether the images have been taken from within the tent by Bell or by someone standing on the outside, to Bell's immediate right. It is particularly confusing because of the presence of a piece of white cloth in the top left corner of 1998.285.160, which appear to be the textile front of the tent that Bell is sitting in, from the right, but which would put the photographer at a strange height. Therefore 1998.285.158 may have been taken by neither Rabden nor Bell (if it is indeed Rabden on the roof), possibly by one of the guests seated below Bell et al and who could therefore easily move around at ground level. Under magnification it is clear that Bell is looking directly at the photographer (as Rabden appears to do so, too) and so was clearly aware of the photographers presence and may, therefore, have sought out this image following the performance [MS 2/6/2004]