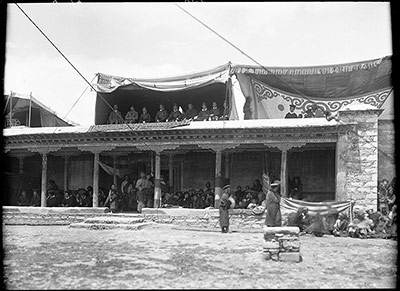 An Ache Lhamo hosted by Sir Charles Bell in Tsetrung Lingka, near Lhasa. In tent on roof, from left, Bell, Kennedy, Yabshi Sarpa, Tsarong Shappe, Ngarpo Shappe, Parkang, Duke of Punkang and two others. Below in verandah are lesser guests.

Manual Catalogues - Bell's List of Illustrations entry: "[No. of chapter] XXVII. [Subject of Chapter] Amusements. [Subject of Illustration] H.136 (h) My Ache Lhamo in Tse-trung Lingka, near Lhasa. In tent on roof - from left, Bell, Kennedy, Yapshi Sarpa, Tsarong Shappe, Ngar-po Shappe, Parkang, Duke of Punkang and two others. Below in verandah are my lesser guests."

In Negative - possibility of use of some kind of intensifying clear film/coating? [MS 2/6/2004]

Other Information - Setting: Bell's Diary for 31st July 1921:"I propose giving a two days ( Ache Lhamo ) theatrical party to the Prime Minister and other Ministers and officials, whom I have met in Lhasa, and who have called on me. The D[alai] L[ama] is lending the actors' dresses for this. The actors have their own dresses, but, when a high official gives a theatrical party, he lends the actors and actresses their dresses, either from his own store rooms, or after borrowing from his friends. Those owned by the D[alai] L[ama] are of course especially fine." [Diary Vol. XI, p.68]