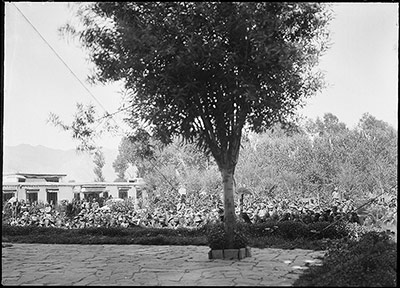 Spectators at the Ache Lhamo dramas performed at the Norbu Lingka. Corner of the stage in foreground with audience standing all around.

Other Information - Setting: This image was taken from the lower right hand side of the stage [MS 3/6/2004]

Other Information - Photographer: Image possibly taken by Rabden Lepcha because Bell describes the location in which he sat very carefully and it seems unlikely that he would wander around the scene to the lower end of the stage from such a privileged and honoured position [see Diary, vol. IX, p.72 for a detailed description of place] [MS 3/6/2004]

Other Information - Cultural background: Bell's Diary for 29th July 1921:"The Ache Lhamo troupes who are to perform shortly before the D[alai] L[ama] from the 1st to the 5th of the first 7th month, are the best in Tibet. I am having the two best of the troupes, ie: the Gyang-karas and the Kyi-mo-lung-was, on the 9th and 10th of the first 7th month (12th and 13th of August) because they are allowed to perform in Lhasa town up to the 8th of this Tibetan month. The Tsendron says that the reason why they are not allowed to perform in Lhasa after the 8th is because the people would waste too much time going to see them. They are however allowed to perform in the lingkas outside Lhasa, but the people do not go to see them there as much as they would in Lhasa." [Diary Vol. XI, p.63-64]