Yaso at Preparation of Camp at Lubu 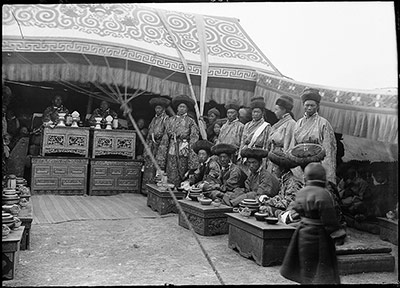 Doring Theji and Trimon Se, appointed as Yaso officials for this year's ceremony, sit on thrones in the shade of decorated tent for ceremony of Lubu Gardrik or Preparation of the Camp at Lubu. Others standing or sitting on either side and behind them. Low tables with domestic objects. Child walking in front of camera

Manual Catalogues - Bell's List of Illustrations entry: "[No. of chapter] XXVI. [Subject of Chapter] Ceremonial and Etiquette. [Subject of Illustration] H.130 (d) The Ya-so and subordinate officers at Lu-gu Gar-drik Lhasa, 1.3.1921. Established by the 5th Dalai Lama in honour of Gusri Khan, the Mongol."

Other Information - Description: Bell's Diary entry for 1st March 1921: " We attended the ceremony called [Tibetan script] ie: 'The Preparation of the Camp at Lugu". // From among the ranks of Se-namba, ie: of those whose ancestors have been Shap-pes, are appointed two, who supervise the ceremonies of the next few days. They are called Ya-so (see diary of last September or early October). These Yaso are usually, it seems, chosen from the younger members of such families. This year they are Doring Techi, aged 21, and Trimon Se who is still younger. Those who are to ride in the pony races and the people generally, appear to hear them give instructions as to the ceremonies if the next few days. // An ornamental tent is pitched on the plain with an open courtyard formed with the sides of the tents, a verandah running round on the inside of the courtyard. For the two Ya-so a throne four feet high, and round this throne are grouped several of the notables of Lhasa with their wives and children, all smiling and merry. // Soon after our arrival the Ya-so enter with their retinue. The Ya-so themselves are dressed in exceptionally gorgeous robes of Chinese brocade after the Mongolian pattern, in which yellow is the prevailing colour. They are dressed in fact as Mongolian princes of old time. These Ya-so and the races over which they preside date from the time of the 5th Dalai Lama, who owed his temporal sovereignty to Mongolian assistance and took this opportunity of showing his gratitude for the same. // Doring Techi, as the elder, makes a speech to those of the people allowed within the courtyard. he is nervous, but it is a good introduction to public life. He tells the people that the 'Great Prayer Festival' (Monlam Chem-no) was instituted by Tsong-ka-pa and enlarged by the 5th Dalai Lama, that ponies and riders must be properly accounted according to the magnificent standard of the past - that they must not talk as they ride in procession, that they must be strictly sober and move to the same effect. The younger Ya-so then reads the instructions of the 5th Dalai Lama, two attendants holding up the letter as he reads. These instructions are on the lines of the Techi's speech. // Then the Techi makes a second speech recounting the ceremonies that are to follow during the next few days. He tells us that they are of good omen and that the ponies and men that are one like servants who ride with their master; so these races and processions will be, as it were, an invitation to the 'King of Love' (the coming Buddha) to come quickly. A much desired event, which is still further emphasised by the 'Invitation to Love' (Champa Dendren) when the image of the coming Buddha will be carried through the town, 3 days hence. // All the ponies are bravely attired, but those of the two Ya-so are particularly magnificent with saddles and saddle cloths encrusted with gold-work, deeply inlaid, and silk trappings on the ponies heads and tails." [vol.IX, pp.1-4]

Contemporary Publication - Published in 'The People of Tibet', Bell, C. A., Oxford: Clarendon Press, 1928, facing p.274:" 'For the two "Highest Worshippers" there are thrones inside the tent. At right angles to these sit the subordinates." [MS 10/9/2004]