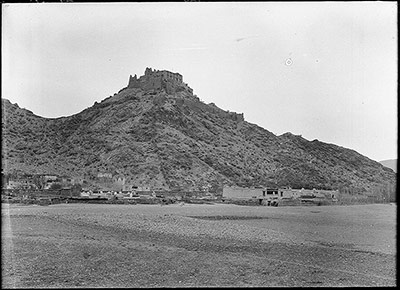 Ruined fort on hill at Dechen. Settlement at foot of hill. Bell and Kennedy stayed in the home of a well-to-do villager at the base of the hill, seen on the right of the image. This photograph was taken when returning from a visit to Ganden Monastery

Manual Catalogues - Bell's List of Illustrations entry for H.126 has been confused with H.120 [see 1998.285.140]. However, this object image is taken from an identical viewpoint as that of 1998.285.67 [BL.H.62], the only indicators that they were taken at different moments being the slight variations in posture of the small crowd of people standing in front of the main building of the settlement. [MS 2/6/2004]

In Negative - There is an ink mark on the negative glass plate which states '25 g'. These marks usually refer to the corresponding list of illustrations, but in this case there is no 'g' in the list for chapter 25, suggesting that the object has been omitted for some reason [MS 2/6/2004]

Other Information - Dates: Dating information has been derived from information given in Bell's caption for 1998.285.67 and the fact that in his diary of April 16th 1921 Bell states that he took photographs of the fort at Dechen when returning from a visit to Ganden Monastery [MS 22/9/2004]