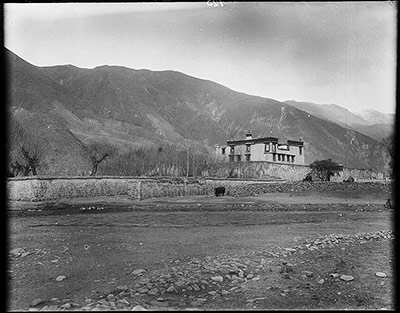 Other Information - Description: Under magnification a Union Jack flag can be seen flying from the roof of the mansion, indicating that the Mission was staying there [MS 22/9/2004]

Other Information - Setting: Bell's diary entry for April 14th/15th 1921, describes the journey from Lhasa to Ganden monastery: 'Some 22 miles from Lhasa the road turns up a broad valley to the right for a mile or so, after which it winds to the left up a hillside to the great monastery of Ganden. We stop for the night at the foot of this hill in a house belonging to the Shatra estates. Yaks gaily ornamented (Photo 3A) are busy ploughing the fields. The village and house are known as Shatra O "Under Shatra". The distance from Lhasa is 24 miles. In the evening at 8pm rain falls, the first we have had since last September, seven months ago. During this period there have been two light falls of snow; one of two or three inches in November, the other of half an inch a month ago. [April 15th] There was a snow storm at 4am leaving an inch of snow in the valley and more on the surrounding hills. Kennedy was awakened by snow coming in on his face through the window. Today is the 8th of the 3rd month, the day when officials must put off their robes and hats and don their summer clothes." [vol. X, pp5-7] [MS 1/6/2004]

Other Information - Related images: see 1998.285.57 for scene of snow-covered hills taken next morning