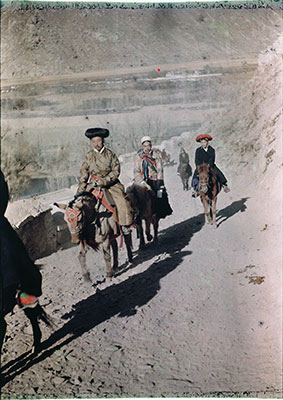 Group of officials riding up to the Potala for New Year Festivities. The official in the centre is in Gyaluche dress

Other Information - Setting: The Mission as a whole was not invited to this, the 2nd day of the New Year ceremonies at the Potala (although this changed in the 1940s) but Chapman was able to go unofficially to take photographs. Mission Diary entry for February 13th 1937: "Chapman went unofficially to the Potala early this morning to photograph a gorgeously bejewelled costume that is worn by thirteen young officials on this day only. ... // Yesterday was the priestly celebration of the New year: today there is a similar ceremony for laymen. ... On this day only in the year the Shapes and Dzasas must wear the "geluchey" dress with its black pleated skirt, multi-coloured silk brocade coat and white cockle shell hat perched on top of the head. Minor officials wear the usual brightly coloured silk robe reaching almost to the ground, and wide flat topped hats edged with fur. Even the servants wear silk" ['Lhasa Mission, 1936: Diary of Events', Part XIV pp. 4-5, written by Chapman] [MS 03/04/2006]