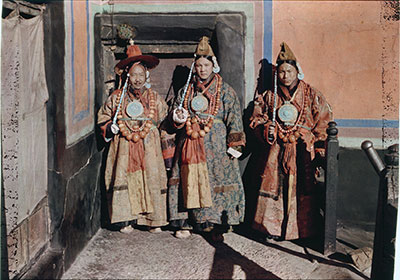 Three officials, Kyibu on the left [in reversed image; should be on right], wearing ancient Tibetan dress known as ringyen for New Year celebrations in 1937. They are wearing silk robes with amber and coral necklaces and a circular gold and turquoise ornament. Kyibu's hat has a scarlet crown and is a sign that he is one of two officials chosen by the Regent for special duties during the ceremony. This dress is supposed to be that which was worn by the ancient kings of Tibet

Other Information - Setting: Three lay officials dressed for the New Year ceremonies in the robes and ornaments of the Yarlung dynasty rulers of Tibet (seventh to ninth centuries A.D.). The huge amber necklaces and turquoise and gold breast plates, known as 'ringyen' (ancient ornaments), were only removed from the Potala treasury for New Year. The man in the red hat is Kyibu, one of the four boys sent by the thirteenth Dalai Lama to study at Rugby school in England in 1913. In "Lhasa: The Holy City", Spencer-Chapman notes that Tibetans "said it would not upset anybody if I went up at eight o' clock, while the officials were dressing up, to photograph them. [CH 2003]