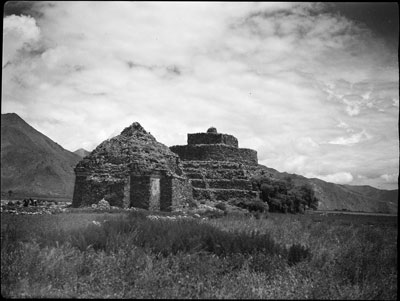 Ruined chorten on the northern side of the Tsangpo river near Takare Gompa, before Chushul.

Manual Catalogues - Caption in Chapman's hand-written list of negatives made whilst on the Mission to Lhasa, 1936-7 [See PRM Manuscripts Collection]: 'Strange chorten before Chusul' [MS 06/04/2006]

Other Information - Related Images: Images prefixed with 'C.10' comprise a group of negatives containing images of Lingmathang, Phari Dzong, Chomolhari from Tuna and chorten at Chusul. A note at the bottom of the page states that the contact prints for these images were all ‘in album’. They were all taken between August 4th - 22nd 1936, with the Mission arriving in Chushul on the latter date [MS 06/04/2006]