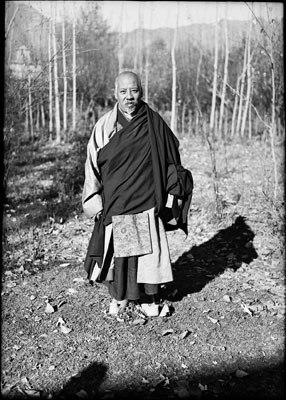 Portrait of Ngagchen Rinpoche, a Ta Lama, with a brocade water bottle cover hanging down at the front of his costume. Trees in the Dekyi Lingka can be seen in the background, as can a small chorten in the distance

In Negative - '2' has been scratched into the bottom of the negative in the right hand corner. This has enabled identification of the image as 'C.12.2' in Chapman's handlist of images made whilst in Lhasa [MS 06/04/2006]

Other Information - Setting: Entry in Mission Diary for November 4th 1936: "Ngagchen Rimpoche came to lunch. He is a genial, bald-headed man with a 'goatee' beard and a twinkle in his eye. He is a great diplomatist. When he first came to see us he quibbled to such an extent that we discovered nothing - which was his intention. But today he was in most confidential mood, and the reputation of no high official in Lhasa was proof against his caustic - but generally just - criticism" ['Lhasa Mission, 1936: Diary of Events', Part VIII p. 3, written by Chapman] [MS 06/04/2006]