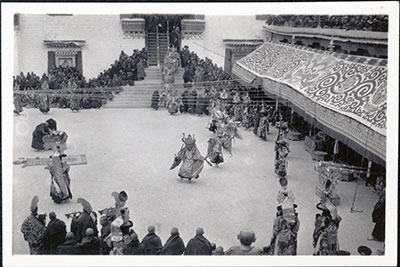 Black Hat dancers at the Tse Gutor ceremony in the Eastern Courtyard of the Potala. In the foreground is the masked figure of Hashang the Chinese priest (in bald headed mask and padded robes). Monks and lay officials stand by him. Trumpet stand supporting two radung horns can be seen on the right in front of the monks' band.

Manual Catalogues - Caption in Chapman's hand-written list of negatives made whilst on the Mission to Lhasa, 1936-7 [See PRM Manuscripts Collection]: '1/2 Black hats dancing round'; PRM Manuscripts Collection: ‘List of Tibetan Prints and Negatives’ - Book 3: ‘9/4 - the Black Hats dance around the ‘corpse’. This dance recalls the arranging of a 9th century murder of one of the Kings of Tibet by a monk in disguise’ [MS 06/04/2006]