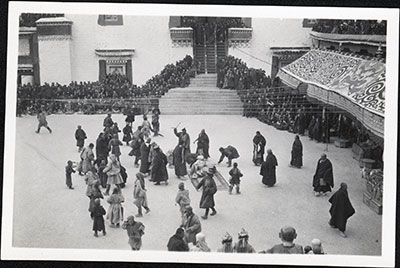 Monk dressed as an old man, lying down in the centre of the Eastern Courtyard on a rug representing a tiger skin. In the foreground is the masked figure of Hashang the Chinese priest (in bald headed mask and padded robes). Monks and lay officials stand by him. Trumpet stand supporting two radung horns can be seen on the right in front of the monks' band. A crowd surrounds the man and tries to take his food

Manual Catalogues - Caption in Chapman's hand-written list of negatives made whilst on the Mission to Lhasa, 1936-7 [See PRM Manuscripts Collection]: '1/2 Crowd rushing for old man’s food’; PRM Manuscripts Collection: ‘List of Tibetan Prints and Negatives’ - Book 3: ‘9/3 - The Ancient Man is given a bowl of dried fruits and sweets. At a given signal the crowd rush him and scramble for the dainties while attendants belabour them with whips’ [MS 06/04/2006]