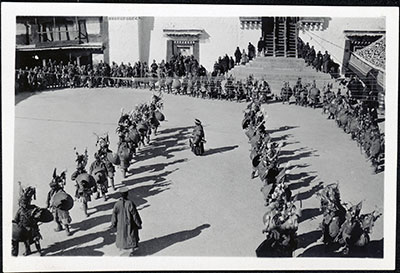 Soldiers, or Zimchongpa, in ancient uniform and carrying shields, dance and display arms at Tse Gutor ceremony to mark the end of the old year. Ceremony takes place in the Eastern Courtyard, or Deyang Shar, of the Potala. Two lines of dancers gathers in the centre of the courtyard whilst other soldiers form a circle around the perimeter. Officials direct proceedings in the centre

Notes on print/mount - This contact print has been made using Velox paper and the trade name in an oval can be seen on the back of the print. The batch development number '640' has been printed on the back in red ink. 'A' in a circle has been written in pencil on the back of the print, as has the question 'Not right running order?', apparently not in Chapman's hand (possibly Richardson's?) [MS 04/04/2006]

Manual Catalogues - Caption in Chapman's hand-written list of negatives made whilst on the Mission to Lhasa, 1936-7 [See PRM Manuscripts Collection]: '1/2 Ditto [Ranks of soldiers] but with shields’ [MS 06/04/2006]