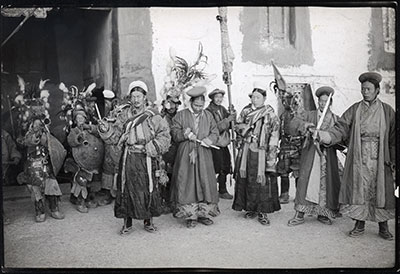 Zimchongpa soldiers in old-style uniform who take part in the soldiers' dance at the Tse Gutor. Two officials wearing gyaluche dress and other officials stand in front of them

Notes on print/mount - The back of the print is covered in crop marks and reproduction instructions. The reference 'C.20' has been written on the back of this print in pencil [MS 04/04/2006]