Reting Rinpoche riding up to Potala at New Year 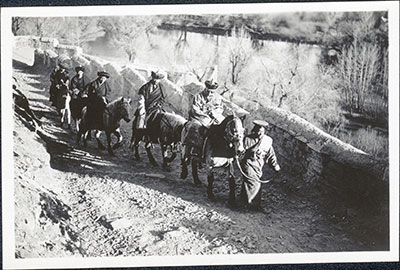 The Regent, Reting Rinpoche, with is attendants riding up to the Potala for New Year Festivities

Manual Catalogues - Caption in Chapman's hand-written list of negatives made whilst on the Mission to Lhasa, 1936-7 [See PRM Manuscripts Collection]: 'Regent and servants riding up to Potala'; PRM Manuscripts Collection: ‘List of Tibetan Prints and Negatives’ - Book 3: ‘1/1 - The Regent and his monk attendants riding up to the Potala for New Year celebrations (Feb. 1937)’ [MS 03/04/2006]