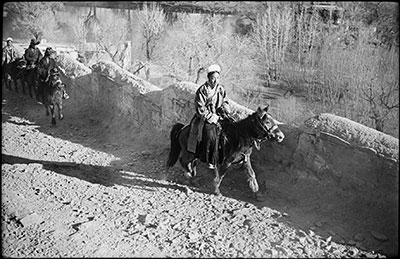 Official riding up to the Potala for New Year Festivities wearing gyaluche dress, one in foreground, the second in the extreme left of the image. Attendants also seen background.

Manual Catalogues - Caption in Chapman's hand-written list of negatives made whilst on the Mission to Lhasa, 1936-7 [See PRM Manuscripts Collection]: 'Young Geluchey riding up to P[otala]’ [MS 03/04/2006]