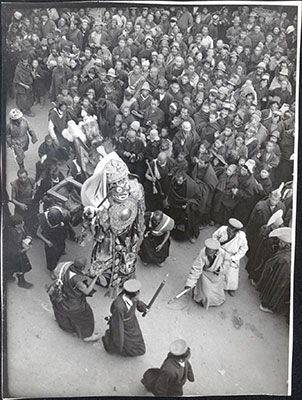 Image of Palden Lhamo (or Penden Lhamo) the chief protectress of Buddhism and the Dalai Lamas, being carried around Lhasa. Monks, officials and spectators.Chair carried behind the figure. (x)

Manual Catalogues - Caption in Chapman's hand-written list of negatives made whilst on the Mission to Lhasa, 1936-7 [See PRM Manuscripts Collection]: 'The idol itself [Palden Lhamo]. poor'; PRM Manuscripts Collection: ‘List of Tibetan Prints and Negatives’ - Book 1, From Gangtok to the Natu La August 1936: ‘38/3 - Image of Palden Lhamo being carried from cathedral through streets. Queen Victoria is supposed to be an incarnation of her’ [MS 03/04/2006]

Other Information - Cultural Background: The representation of Palden Lhamo, chief protectoress of Buddhism, the Dalai Lama and all Tibet, being carried around Lhasa. This photograph was taken on November 28th 1936 from the roof of Surkhang Se’s house. The image is halted in front of all the important houses in Lhasa and the owner makes an offering to appease the deity.

Research publication - This image was published in Ceremonies of the Lhasa Year , Hugh Richardson, London: Serindia Publications, 1993, p. 112. However, it has been printed in reverse [MS 03/04/2006]