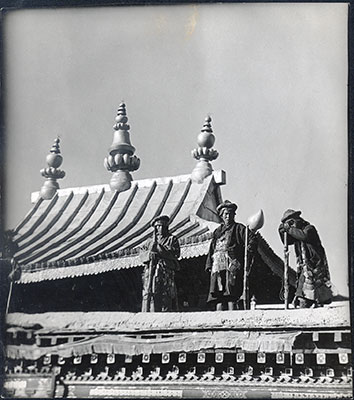 Zimchongpa or foot soldiers in ancient armour on the roof of the Jokhang Temple at dawn.

Manual Catalogues - Caption in Chapman's hand-written list of negatives made whilst on the Mission to Lhasa, 1936-7 [See PRM Manuscripts Collection]: 'Ditto Ditto [View of armoured soldiers on Cathedral roof [Jokhang] ] left side only in focus. Pagoda on left'; PRM Manuscripts Collection: ‘List of Tibetan Prints and Negatives’ - Book 2: ‘17/3 - Soldiers in ancient armour on roof of Potala [ sic ]’ [MS 02/04/2006]

Research publication - This image was published in Ceremonies of the Lhasa Year , Hugh Richardson, London: Serindia Publications, 1993, p. 117. However, it illustrates text relating to the 'Votive Offering of the 29th Day of the Twelfth Month' - the Tse Gutor . The images, as detailed here, was not in fact taken on that occasion [MS 03/04/2006]