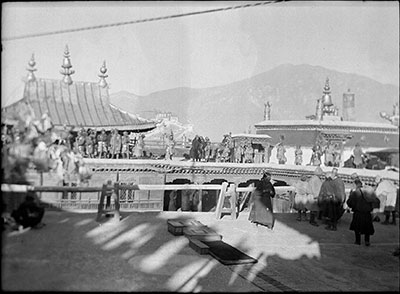 Zimchongpa or foot soldiers in ancient armour on the roof of the Jokhang Temple at dawn. They wear chain mail, steel helmets with large plumes. Holding standards. Potala can be seen in the distance

Manual Catalogues - Caption in Chapman's hand-written list of negatives made whilst on the Mission to Lhasa, 1936-7 [See PRM Manuscripts Collection]: 'View of armoured soldiers on Cathedral roof [Jokhang] Potala in distance' [MS 02/04/2006]