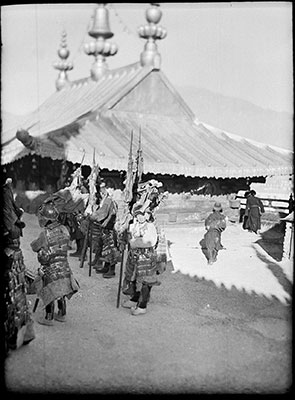 Zimchongpa or foot soldiers in ancient armour on the roof of the Jokhang Temple at dawn. They wear chain mail, steel helmets with large plumes. Holding standards.

Manual Catalogues - Caption in Chapman's hand-written list of negatives made whilst on the Mission to Lhasa, 1936-7 [See PRM Manuscripts Collection]: 'Vert ditto [Cooking pot in foreground, pagoda and soldiers far away, soldiers holding banner] in part out of focus pagoda' [MS 02/04/2006]