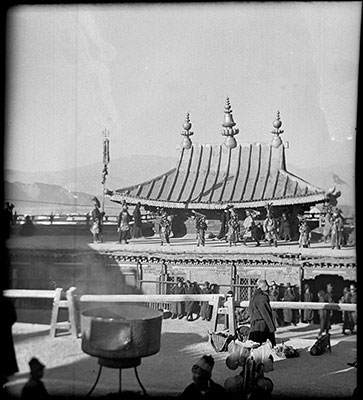 Zimchongpa or foot soldiers in ancient armour on the roof of the Jokhang Temple at dawn. They wear chain mail, steel helmets with large plumes. Some carry wickerwork shields, firearms or trumpets. Cooking pot in foreground

In Negative - '5' has been scratched into the bottom left corner of the negative. The right hand side of the image, amounting to about one third of the original negative, has been cropped. [MS 02/04/2006]

Technical Information - The right hand side of the image, amounting to more than half of the negative, has been cropped. This may be explained by the fact that it was out of focus [see 'Manual Catalogues' notes for 1998.131.571]. From December 1936 onwards Chapman complained that there was a problem with his Zeiss Super Ikonta camera, which he used to take quarter plate images such as this [See ['Lhasa: The Holy City', F. Spencer Chapman, London: Chatto & Windus, 1938]. The Super Ikonta was notorious for having a problematic shutter. However, as this ceremony took place at dawn, it might be simply the case that light conditions affected the quality of the images taken [MS 02/04/2006]

Manual Catalogues - Caption in Chapman's hand-written list of negatives made whilst on the Mission to Lhasa, 1936-7 [See PRM Manuscripts Collection]: 'Cooking pot in foreground, pagoda and soldiers far away, soldiers holding banner' [MS 02/04/2006]