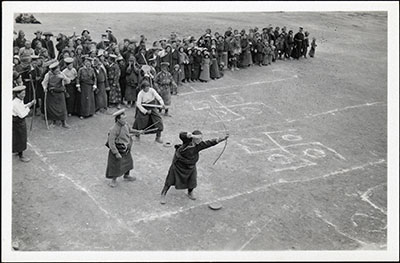 Archers practising their skills outside Lhalu Mansion. A group of children and other onlookers can be seen watching the competition

Other Information - Related Images: It has been possible to identify this image as 'D.10' in Chapman's handlist by cross-referencing it with 1998.131.568.2, which is identified as 'D.11'. Images prefixed with 'D' comprise a group of negatives containing images of the Potala and dancers at the Potala, Norbu Lingka animals, dance at Nechung. They all seem to have been taken just prior to the Missions departure in February 1937. [MS 02/04/2006]

Other Information - Setting: The Mission visited Lhalu Mansion on February 15th 1937 to have a farewell dinner with Ringang. This event was probably taking place in the environs of the Mansion on the occasion of that visit [MS 02/04/2006]