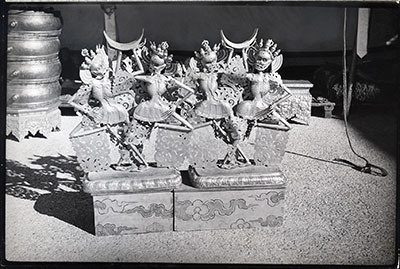 Notes on print/mount - The back of the print is covered in crop marks and reproduction instructions. The reference 'OC 19' has been written on the back of the print in pencil. A thin piece of paper has been stuck across the top back edge of the image and folded over the front. Usually this would be used to transfer crop and reproduction instructions between back and front of the image but it has not been used in this case [MS 02/04/2006]

Other Information - Related Images: Images prefixed with 'C' comprise a group of negatives containing images of the Potala and dancers at the Potala. They seem to have been taken between February 10th - 13th 1937, with this image appearing in a sequence of images apparently from the Potala on the latter date [MS 02/04/2006]