Pole at Namdrotagtse ceremony by Potala 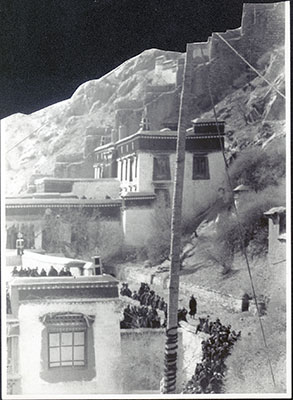 New year ceremony of Namdrotagtse, the 'Sky Dancing Rope Game' or Chakhen Tagshur, or 'Sliding down the rope like a bird'. Performed on 2nd day of the 1st month, King's New Year, at the foot of the Potala. Crowds gather round to watch the ritual as the man stands on the top of the pole preparing to position himself to spin round. This photograph was taken using a telephoto lens and the top of the image can be seen in 1998.131.541

Other Information - Photographer: This image might not have been taken by Chapman as it does not relate to any images that are in his handlist. All the photographs printed out on Agfa Brovira paper on this occasion, all of which have been taken with a telephoto lens, have a similar status. It may be, therefore, that another photographer took these images. Tsarong Dzaza accompanied Chapman to the Potala on this day and, as a keen photographer, it might even be the case that he took these images, although further evidence is required [MS 02/04/2006]

Other Information - Related Images: This photograph matches exactly the lower portion of this scene as seen in 1998.131.541. It seems that a smaller image was enlarged as two separate images, this image then being cut to fit the top [MS 02/04/2006]