Crowd at Namdrotagtse ceremony by Potala 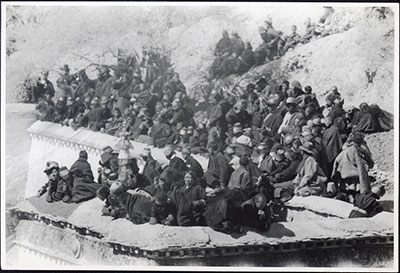 New year ceremony of Namdrotagtse, the 'Sky Dancing Rope Game' or Chakhen Tagshur, or 'Sliding down the rope like a bird'. Performed on 2nd day of the 1st month, King's New Year, at the foot of the Potala. Crowds gather round to watch the ritual. This photograph has probably been taken with a telephoto lens

Notes on print/mount - This print has been made on Agfa Brovira paper. The numbers '6' (erased) and '9' have on different occasions been written on the back of the print [MS 02/04/2006]

Manual Catalogues - It seems that this image may be identified as 'D.5' from circumstantial evidence. This number is not written on either of the contact prints. Alternatively, it may have been taken by another photographer (such as Tsarong) who accompanied Chapman on this occasion. Caption in Chapman's hand-written list of negatives made whilst on the Mission to Lhasa, 1936-7 [See PRM Manuscripts Collection]: '1/2 The crowd [?]’ [MS 02/04/2006]