Officials at Namdrotagtse ceremony by Potala 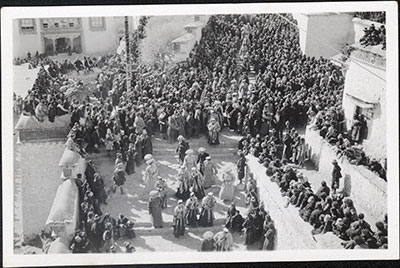 New year ceremony of Namdrotagtse, the 'Sky Dancing Rope Game' or Chakhen Tagshur, or 'Sliding down the rope like a bird'. Performed on 2nd day of the 1st month, King's New Year, at the foot of the Potala. Just after midday the officials descend the Potala steps to see the ritual

Manual Catalogues - It seems that this image may be identified as 'D.6' from circumstantial evidence. This number is not written on either of the contact prints. Caption in Chapman's hand-written list of negatives made whilst on the Mission to Lhasa, 1936-7 [See PRM Manuscripts Collection]: '1/2 Officials coming thro’ the crowd'; PRM Manuscripts Collection: ‘List of Tibetan Prints and Negatives’ - Book 3: ‘11/3 - Official coming down the Potala steps to watch the acrobat. A way was first cleared by dragging a dead yak down’ [MS 02/04/2006]