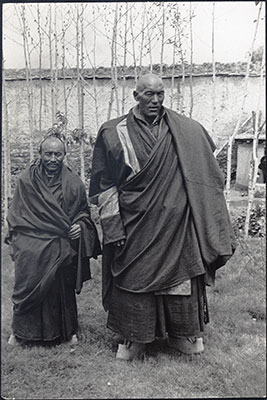 The monk known to the British Mission as 'Simple Simon' who was an Attendant to the Regent, Reting Rinpoche. Seen here in the garden of the Regent's summer palace, Shide Drokhang. Another, unidentified monk stands alongside

Other Information - Description: The monk attendant known to the British as “Simple Simon”. Spencer Chapman describes this photographic session: “when we all went into the garden the Regent had no objection to being photographed, and it was all I could do to persuade his huge orderly (whom we nicknamed Simple Simon) to move about when I wanted to take some cinema films; he struck what he thought was an imposing attitude and resolutely refused to move.” In the 1936 Mission Diaries “Simple Simon” appears again: 28th August – Lhasa – in the morning they called upon the Regent at his home. “Neame and Chapman were allowed to take photos and cine of the Regent; amongst his attendants was a giant lama, some 7-feet high, and when Neame snapped him he began to talk and wave his arms. These were not threatening gestures as he was only asking for a copy of the photo”.