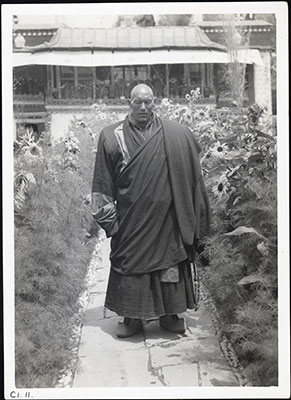 The monk known to the British Mission as 'Simple Simon' who was an Attendant to the Regent, Reting Rinpoche. Seen here in the garden of the Regent's summer palace, Shide Drokhang. Holding prayer beads with sunflowers lining the path.

Other Information - Related Images: It has been possible to identify the reference number for this image by cross-referencing the caption for related images prefixed with 'C.1' and identifying the image in the draft album of the images taken during the Mission which was on loan to the PRM for the exhibition "Seeing Lhasa: British Depictions of the Tibetan Capital" (2003-4) [MS 01/04/2006]