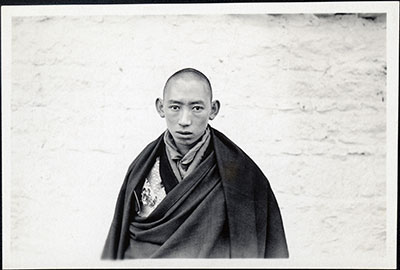 The Regent of Tibet in a 1/2 length close-up portrait, probably taken outside the summer house, Shide Drokhang, on the occasion of a cinema presentation for the Regent put on by the Mission staff

Other Information - Related Images: This image is the original from which 1998.131.518.1&2 have been made. These latter prints identify the image as being '2.15' in Chapman's handlist and other data related to this is derived from this attribution [MS 01/04/2006]

Other Information - Related Images: Images prefixed with '2' comprise a group of negatives including Kampa people, Kinchung, a shuttle cock game and images of the Regent’s palace. They seem all to have been taken between January 15th - 27th 1937, with photographs of the Regent being taken on January 27th when the Mission was invited to put on another performance of their cine film for the Regent in Shide Drokhang [MS 01/04/2006]