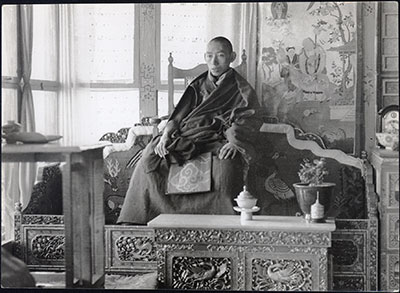 Manual Catalogues - Caption in Chapman's hand-written list of negatives made whilst on the Mission to Lhasa, 1936-7 [See PRM Manuscripts Collection]: 'In Regent’s room. Norbhu on left. R [Regent] sitting' [Note: this caption does not relate to the image that appears with this reference in the draft album of the Mission or that seen here, in which Norbhu is not visible] [MS 01/04/2006]

Other Information - Related Images: Images prefixed with 'C.1' comprise a group of negatives containing images of Gould, Prime Minister, Regent, ‘big’ monk. They all seem to have been taken on August 27th -28th 1936, with this image of the Regent being taken on the latter day [MS 01/04/2006]

Other Information - Setting: Mission Diary entry for August 28th 1936: "We called this morning on the Regent at his private residence which is a newly built small house or pavilion in the grounds of Shide Gompa in the city of Lhasa. ... // The young Regent was much more natural and talkative here than in the Potala yesterday. This time the Prime Minister was not present and only a very friendly Dzasa in chief attendance with several minor officials. All were very friendly and natural. ... //Neame and Chapman were allowed to take photos and cine of the Regent; amongst his attendants was a giant lama. some 7-feet high, and when Neame snapped him he began to talk and wave his arms. These were not threatening gestures as he was only asking for a copy of the photo" ['Lhasa Mission, 1936: Diary of Events', Part IV p. 4, written by Neame] [MS 01/04/2006]