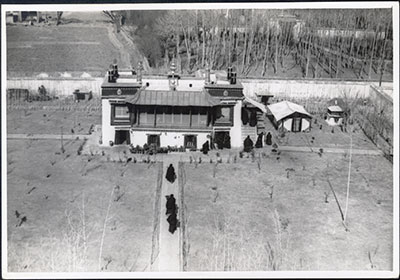 The Regent of Tibet's palace from above, Shide Drokhang. Situated north of Shide monastery which is affiliated to Reting monastery. Decoration on roof - auspicious banners and devil catchers on corners. This image was probably taken from the roof of Shide Monastery, which lies immediately to the south of this summer house

Manual Catalogues - Caption in Chapman's hand-written list of negatives made whilst on the Mission to Lhasa, 1936-7 [See PRM Manuscripts Collection]: 'Regent’s Palace from above, people walking away' [MS 30/03/2006]

Other Information - Related Images: Images prefixed with '2' comprise a group of negatives including images of Khampa people, Khenchung, a shuttle cock game and images of the Regent’s palace. They seem to have been taken between January 15th - 27th 1937 [MS 30/03/2006]