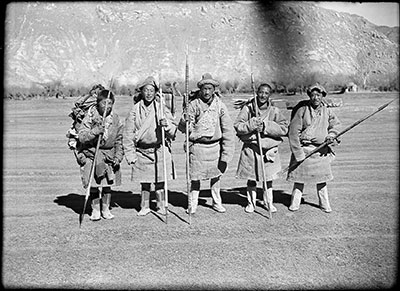 Group of five Tibetan travellers on the Lhasa Plain carrying baggage and wooden staves. Encountered en route to film the return journey of the Reting Regent from Samye to Lhasa

Notes on print/mount - '19' has been scratched into the negative in the bottom right hand corner. This has enabled identification of the image as 'C.13.19' in Chapman's handlist of images made whilst in Lhasa [MS 30/03/2006]