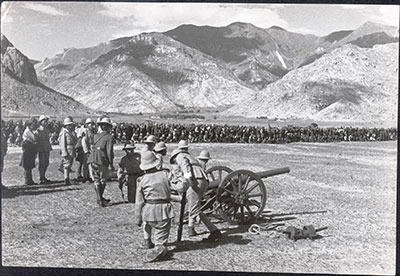 Gun being fired by the army during the military review held at Trapshi in September 1937 for Brigadier Neame. Spectators can be seen lining the parade ground in the background

Manual Catalogues - Caption in Chapman's hand-written list of negatives made whilst on the Mission to Lhasa, 1936-7 [See PRM Manuscripts Collection]: 'V. [vickers] gun going off' [MS 30/03/2006]