Jigme Taring and Yuthok in uniform 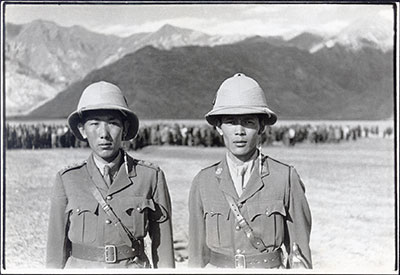 1/2 length of Jigme Taring and Yuthok in their new uniforms. As both are from noble families they wear the official earring in the left ear as well as their uniforms. Spectators in background. They are being photographed at a review of the troops held in September 1936

Manual Catalogues - Caption in Chapman's hand-written list of negatives made whilst on the Mission to Lhasa, 1936-7 [See PRM Manuscripts Collection]: 'Close up Uttock and Jigme' [MS 30/03/2006]

Biographical Information - Jigme Taring and Yuthok in their new depön (Generals) uniforms. These were inspired by British models and included khaki tunics, riding breeches and field boots. As both were members of noble families they also wear long turquoise ear-rings and amulets. Yuthok had been sent to Quetta (in British India) to receive training as an artillery officer. Jigme Taring was the son of Rajah Taring of Sikkim and married to Rinchen Dolma (“Mary”) the ex-wife of Tsarong. This photograph was taken at a military display designed to illustrate to Colonel Neame (the 1936 Mission’s military advisor) the quality of the Tibetan forces. A large crowd turned out for this display and the band even played “God Save the Queen”. [CH 2003]

Other Information - Entry for Mission Diary September 7th 1936: "A review of the available troops in Lhasa, about 400, was arranged near the Trabchi (Arsenal) so that Neame could see them drilling and carrying out range practices with gun, machine gun, Lewis gun and rifle. ...// Gould, being indisposed from a chill was unable to come out. The rest of us ... were received with due ceremony by a guard of honour under Yutok Depon outside the Trabchi, then by the Commanders-in-Chief in the barrack square and finally upstairs in the reception room by the Kashag. ... // After this two machine guns were fired. Under Depon Jigme the Machine Gun preliminary training has been quite good. Only direct fire was carried out, but surprise targets were indicated and engaged with some success" ['Lhasa Mission, 1936: Diary of Events', Part V pp. 4-5, written by Neame] [MS 30/03/2006]