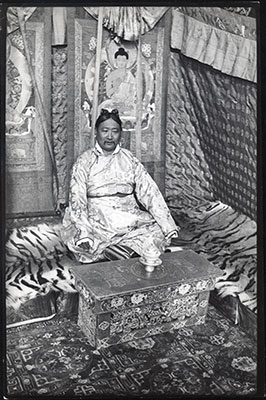 Ringang's elder brother Sonam Rabten, the Minister of Agriculture, sitting on a tiger skin with thangka and auspicious hangings adorning the wall behind him. He is seated on a low seat behind an elaborately decorated table with a silver

Notes on print/mount - The back of the print is covered in crop and reproduction instructions. The caption 'Ringang's elder brother - the Minister of Agriculture' has been written on the back in pencil, as has the reference '4/3' [MS 30/03/2006]

Biographical Information - Sonam Rabten, the Minister of Agriculture. Ringang’s elder brother Sonam Rabten, who had been the mipon (mayor) of Lhasa in the 1920s and became the Tibetan Minister of Agriculture in 1936, sitting on a tiger skin with thangkas and auspicious wall hangings behind him. He was a 4th rank official and as an ex-military man, often talked to the British and specifically Colonel Neame about the Tibetan military situation. He was also one of the officials who went to meet the 14th Dalai Lama upon his recognition, suggesting that he must have moved up the ranks by 1939. Spencer Chapman recorded his impressions of the man thus: “Once seen, the elder Ringang is not easily forgotten, being the very embodiment of Falstaff. He is of enormous size, and is perpetually out of breath and perspiring. His face is continuously wreathed in smiles, and he is the champion drinker of chang in all Tibet, having the rare and enviable accomplishment of being able to pour a glass of beer straight down his throat without swallowing” (1938:84) [CH 2003]

Other Information - Related Images: Images prefixed with '4' comprise a group of negatives showing images of people including Ringang and Rumba. They seem probably to have been taken between January 10th - 14th 1937, although this requires further clarification [MS 30/03/2006]