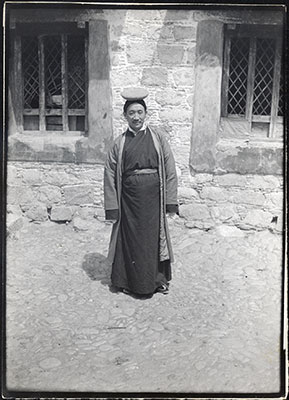 Notes on print/mount - The back of the print is covered with crop and reproduction marks. The caption 'Ringang - an old Rugbeian' has been written on the back of the print in pencil, as has the reference number 'C/6/5'. A piece of thin paper has been stuck across the top back edge of the print and folded over the front as a means of transferring cropping instructions etc. A small box has been drawn around the figure of Ringang, indicating that his image was to be cropped from this photograph and enlarged. The caption seen on the back has also been written on the front [MS 30/03/2006]

Biographical Information - Ringang Was One Of The Four Boys Sent To England To Be Educated At Rugby In 1913 (this Was Arranged By Sir Charles Bell And The 13th Dalai Lama). On His Return From England He Was Responsible For Installing Electricity In Lhasa. [[Marina de Alarcón ZF 1995 4]]