Daughters of Taring and Ramba 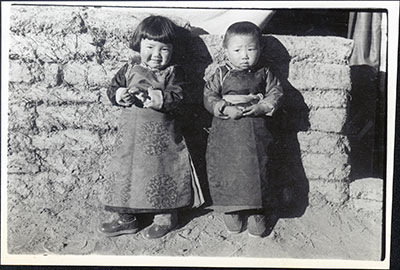 Jigme and Mary Taring's daughter, Mary, on the left and Ramba's daughter on the right at the Christmas party for the children of officials hosted by the Mission. Mary is wearing western-style shoes

Other Information - Related Images: Images prefixed with 'BF' comprise a group of negatives containing images of views down Kampa La to Tsangpo, Khampa people, the postmaster’s school, Tsarong’s family, Mary Jigme, Rumba’s family and Tendong’s children. They seem to have been taken at the end of December [MS 28/03/2006]

Other Information - Setting: "Any stranger visiting the Dekyi Lingka this morning might well have imagined either that the Pied Piper had just passed by or that we were starting a school. Actually we were having a Children's Party, and by lunch time about seventy of the sons and daughters of the Lhasa officials had arrived. ... The youngest child, Mary, Jigme's daughter, was only three, but the majority were in their 'teens. They wore silk or broad-cloth robes down to their ankles and high-crowned hats with fur-lined ear flaps. ... As soon as the children arrived they went upstairs for tea and Christmas cake; it was luck that many were late, as there were more than we had expected and it was difficult to find a seat for everybody in our small room" ['Lhasa Mission, 1936: Diary of Events', Part XI, pp. 2-3, written by Chapman] [MS 28/03/2006]