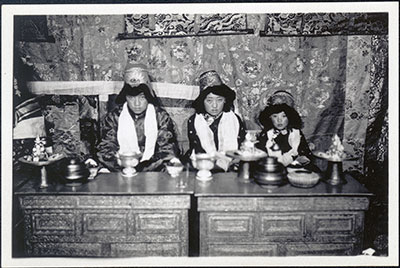 Tsarong's children at New Year celebrations .Tsampa containers, tea, dishes with sweetmeats on wooden tables in front of them. Brocade curtain and thangka behind them. There is slight blurring in the image so that the offering cups are not sharply in focus

Manual Catalogues - Caption in Chapman's hand-written list of negatives made whilst on the Mission to Lhasa, 1936-7 [See PRM Manuscripts Collection]: '3 children - moved [at Tsarong’s house]' [MS 28/03/2006]