Tsarong and Pema Dolkar at home at New Year 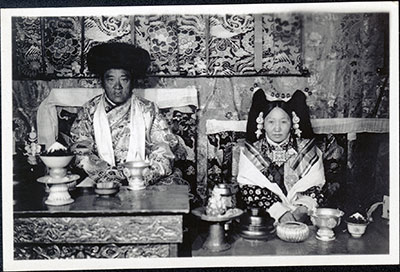 Tsarong and his wife Pema Dolkar in ceremonial dress during the New Year celebrations in Tsarong's house in February 1937. They are sitting behind tables with bowls and dishes containing barley meal, butter, rice and fried cakes. They are wearing white offering scarfs and Tsarong is wearing a heavy silk brocade aristocrat's robe embroidered with Chinese dragons. Pema Dolkar is wearing brocade outer garments and an elaborately jewelled headdress. The white scarfs around their necks indicate that the ceremony of offering barley beer between the household members had finished. Tsarong made special arrangements to ensure that Chapman, the photographer to the British Mission to Lhasa in 1936-37, could photograph the occasion in artificial light.

Manual Catalogues - Caption in Chapman's hand-written list of negatives made whilst on the Mission to Lhasa, 1936-7 [See PRM Manuscripts Collection]: 'Tsarong and wife at home ceremony' [MS 28/03/2006]

Biographical Information - Dasang Damdul Tsarong was a favourite of the 13th Dalai Lama, a military man and later a shappe (cabinet minister in the Tibetan government) until he was removed from office as a result of his modernising policies. He was a great friend of the British Mission frequently inviting them to his house and accompanying them on their various visits around Lhasa. He was considered by the mission to be a great character, as Gould recalled “Once, after a long and festive party at the De Kyi Lingka, he fell asleep in my arms murmuring, “Great minister, I love you, I love you”. At breakfast next morning he had his usual bright eye and was quite unperturbed. He spoke a little English. To him it seemed strange that anybody in India should not welcome British rule”. (1957:236) He had four wives (Including Rigzin Choden, Pema Dolkar, Rinchen Dolma (later Mary Taring) and Tseten Dolkar) and ten children. Although he was in India in 1956 he insisted on going back to Tibet to help the Dalai Lama to escape into exile. He was captured by the Chinese and in 1959 died mysteriously the night before what was due to be his public humiliation. [CH 2003]

Other Information - Dress: Tsarong is shown wearing the dress of a high official at the New Year ceremony in 1936. The chuba (gown) is made from silk brocade with Chinese-style dragon motifs. His gold, turquoise and coral ‘sog byil’ (ear-ring) indicates that Tsarong was a high-ranking layman of the Tibetan government. A strict dress code applied at ceremonial occasions such as this and Tibetans were told what to wear depending on their status. Born into a peasant family, Nangang, took the name Dasang Damdul Tsarong when he married into an aristocratic family. He was a favourite of the 13th Dalai Lama and served both as a military leader and a member of the Tibetan government. [CH 2003]

Other Information - Setting: Tsarong and one of his wives, Pema Dolkar, in ceremonial dress during the New Year celebrations at their home in Lhasa. This photograph was taken during a New Year party to which Chapman and other members of the 1936 Mission were invited. Tsarong made special arrangements for electric lights to be brought into the house so that Chapman could take photographs, which normally would not have been possible due to the darkness in most Tibetan interiors. Chapman noted that: “ On one side of the room was a high throne for Tsarong, and next to it on the left, another, slightly lower, for his wife, and others, lower still, for the three children. Seats for the guests of the house were arranged on the other side of the room”. “It was all very simple, and the atmosphere, although dignified, was friendly, and emphasised the patriarchal nature of the family. It would be hard to find a people who can keep up their tradition with greater dignity and less self-consciousness that the Tibetans”. [Lhasa the Holy City, F. S. Chapman, London: Chatto & Windus, 1938:321] [Clare Harris, 2003]

Other Information - Dress: Chapman wrote quite extended descriptions of the setting of this photograph in both the official Mission Diary of the 1936-37 Mission to Lhasa, for which he was responsible as Sir Basil Gould's Secretary and his main publication concerning his time in Tibet Lhasa the Holy City [London: Chatto & Windus, 1938; reprint London: Readers Union, 1940]. The accounts differ little, demonstrating how Chapman would sometimes lift sections from the diary for his publication. However, Chapman wrote more fully of Tsarong's costume in the Mission Diary. He stated: "The master's seat is a canopied divan which varies in height with the rank and dignity of the owner. Besides him on his left sit his wife and children in all their best clothes. If he is of high rank the master will be wearing a robe of yellow silk patterned with Imperial five-clawed dragons, and a round flat hat of red silk heavily bordered with fur and topped by an ornament of gold turquoise and other semi-precious stones surmounted by a ruby or amethyst button - a survival of the Chinese buttons of rank. His wife will be wearing over her skirt the striped apron worn by all married women; a brocade blouse with a scarf of plum coloured silk across her breast and one of rainbow colours round her shoulders. Her headdress will be heavy with great corals and turquoises and hung with closely woven streamers of seed pearls; more gold and turquoise ornaments set with precious stones hang down from her shoulders, and on her breast is a large star-shaped charm box of gold studded with turquoise and diamonds" [Mission Diary for 14th February 1937]. The scarf would have been placed around Tsarong's neck when the ritual offerings of barley beer had been presented to him by the household. He would then have reciprocated to his family and servants [see 1940:320-22] [MS 30/6/2005]