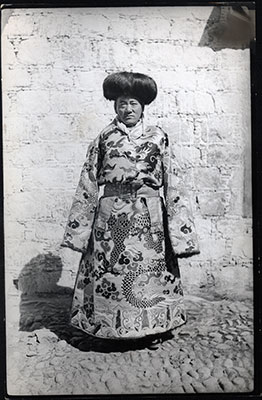 Notes on print/mount - The back of the print is covered with instructions for how to reproduce the image. These include the instruction to touch up the image in the top right hand corner and 'After trimming off black edges cut 1/2" from top and 1/4" from bottom and enlarge to 5 5/8" across'. The reference number O/A/7 has been written across the back of the print in pencil and this number relates to the numbering system that Chapman adopted for images taken whilst on the British Mission to Lhasa in 1936-37. The further reference number '57' has also been written in pencil in the top left hand corner on the back of the print [MS 30/6/2005]

Manual Catalogues - Caption in Chapman's hand-written list of negatives made whilst on the Mission to Lhasa, 1936-7 [See PRM Manuscripts Collection]: '1/2 Tsarong in special dress'; PRM Manuscripts Collection: ‘List of Tibetan Prints and Negatives’ - Book 3: ‘11/1 - Tsarong Dzasa in a New year’s robe of silk and brocade from Russia. The hat is scarlet’ [New Year] [MS 27/03/2006]

Biographical Information - [Note that detailed information will be found on the related file named Biographies, see button at top of database] Tsarong had been a Shap-pe (cabinet minister in the Tibetan government) but at the time of the British Mission in 1936 he controlled Trapchi, The Government Barracks, Arsenal and Mint and was powerful in the National Assembly. [Marina de Alarcón ZF 1995.5]

Biographical Information - Dasang Damdul Tsarong was a favourite of the 13th Dalai Lama, a military man and later a shappe (cabinet minister in the Tibetan government) until he was removed from office as a result of his modernising policies. He was a great friend of the British Mission frequently inviting them to his house and accompanying them on their various visits around Lhasa. He was considered by the mission to be a great character, as Gould recalled “Once, after a long and festive party at the De Kyi Lingka, he fell asleep in my arms murmuring, “Great minister, I love you, I love you”. At breakfast next morning he had his usual bright eye and was quite unperturbed. He spoke a little English. To him it seemed strange that anybody in India should not welcome British rule” [1957:236]. He had four wives (including Rigzin Choden, Pema Dolkar, Rinchen Dolma (later Mary Taring) and Tseten Dolkar) and ten children. Although he was in India in 1956 he insisted on going back to Tibet to help the Dalai Lama to escape into exile. He was captured by the Chinese and in 1959 died mysteriously the night before what was due to be his public humiliation. [CH, 2003]

Other Information - Related Images: Images prefixed with 'A' comprise a group of negatives containing images of officials and the Regent riding in ceremonial dress up to the Potala taken during the New Year ceremonies at Lhasa [MS 27/03/2006]

Other Information - Dress: Silk brocade outer garments of this kind could only be worn by officials above the 6th Rank [Marina de Alarcón ZF 1995.5]

Other Information - Dress: The 'chuba' (gown) is silk brocade with Chinese-style dragon motifs. His gold turquoise and coral 'so byis' (ear-ring) designates status as a high ranking layman of the Tibetan government. Born into a peasant family, Namgang took the name Tsarong when he married into an aristocratic family. He was a favourite of the 13th Dalai Lama and served both as a military leader and a member of the Tibetan government. This picture was taken at the start of the New Year celebrations when, as Chapman recalls in "Lhasa: The Holy City", all lay-officials wore their finest clothes: "I had the impression of watching some gay medieval pageant, some fantastic Hollywood production, or a throng of people in fancy dress... Tsarong wore a glistening brocade dress with a multicoloured pattern of scaly dragons." [CH 03/04/2000]

Other Information - Dress: Chapman reported in the official mission diary for 12th February 1937 that this costume reputedly cost him two thousand rupees. However, Tsarong's son Dundul Namgyal Tsarong [see 1998.131.485, 1998.131.486 and 1998.157.85] wrote in his biography of his father that when Tsarong was first promoted to high rank he struggled to be able to afford the formal accoutrements of his new position: "At this time, Father had very little resources and His Holiness supplied him with the entire wardrobe, including formal robes, hats, boots, etc, that is required of a Dzasak [government official ranked directly under that of a Cabinet official or shappe ]. Government officials of all ranks wore very elaborate costumes at formal functions, which amounted to quite an expense. His Holiness gave him religious images, a rosary, horses, saddles and two Tibetan seals bearing his title. He then sent Father off to the house of Tsarong with his blessing" [ In the Service of his Country: the Biography of Dasang Damdul Tsarong, Commander General of Tibet , Dundul Namgyal Tsarong, Ithaca, New York: Snow Lion Publications, pp. 47-8] [MS 30/6/2005]