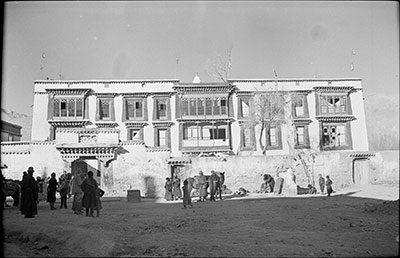 Exterior of the official Mondo's house in Lhasa. Tibetans, Mission members including Gould and horses in foreground.

Manual Catalogues - Caption in Chapman's hand-written list of negatives made whilst on the Mission to Lhasa, 1936-7 [See PRM Manuscripts Collection]: 'Mondo’s house' [MS 27/03/2006]

Other Information - Setting: "Now [Mondo] is a fifth rank official, sharing with Ramba, our lay guide, the charge of Sho, the village at the foot of the Potala. He also has an office in the Potala and is partly responsible for the park-lands of Lhasa. Mondo is a large, genial man with a loud ringing laugh and the extraordinary consideration and politeness that is so strong a characteristic of all the official class. he must have considerable wealth, for he is at present building a large and very beautiful mansion behind Muru monastery in the extreme north-eastern corner of the city" ['Lhasa: The Holy City', F. Spencer Chapman, London: Chatto & Windus, 1938, pp. 85-6] [MS 27/03/2006]